While claiming to address the "shortage" of skilled welders, a company called Hirebotics has now engineered the first "robotic welding solution for hire". The automated welder is paid by the hour, just like skilled manual labour, and is far less likely to need a bathroom break and/or file a grievance with the local union.

Claiming that traditional robotic welding automation has been a "poor solution" for most fabricators, the company is now offering a product called the BotX welder, which it says can accelerate business growth while eliminating the "headaches" of finding skilled welders. 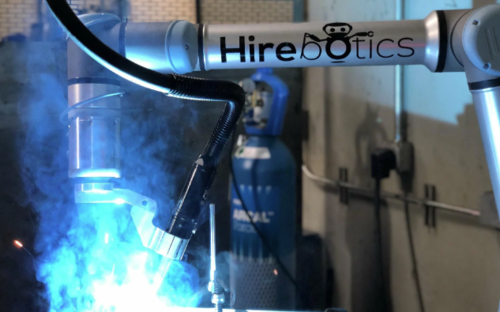 The company, which was started with the goal of helping along manufacturers, says that the BotX Welder bridges the gap between inflexible, expensive and higher productive traditional automation and manual welding with skilled welders. It says that the BotX can be used both as a tool for a company's manual welders to get more done each day, and also as a robotic welder that is set up by a skilled welder, but then run by an untrained operator, via app

The company claims there are four key advantages to its solution: