The developers of the Prism Building in Cork say they expect to be on-site at the development before the end of the year. Conor Lee, director of operations with Tower Holdings in Ireland, confirmed that the company is set to go to tender for the project within the next few weeks and is optimistic that construction could commence before the end of 2019.

Addressing Southern Construct 2019, a construction industry conference, Mr Lee outlined the New York-based company's ambitious plans for Cork, describing the city as "a blank canvas" and one that had been on the radar of company founder Kevin O'Sullivan for some time.

The first project that will be undertaken by Tower Holdings in Cork is the Prism, the 15-storey office block that will be built next to the Parnell Place bus station. 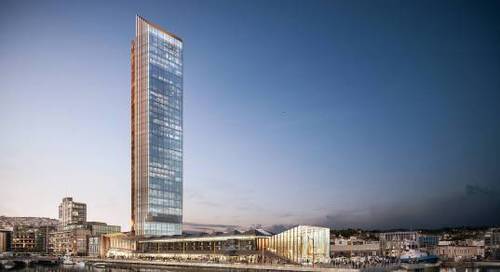 Mr Lee said that it will mimic the style of so-called "skinny-scrapers" that are emerging in areas like Manhattan as it is located on a site that is just 320 square metres. Planning was granted for the project in May and it will include 6,000 sq m of commercial space which, according to Mr Lee, is more suited to indigenous companies than large-scale FDI which will be prevalent elsewhere in the docklands due to the small office spaces.

Mr Lee confirmed that they have had "significant interest" in the site but have not yet started pre-letting the development as it has an expected 18-month build time.

Mr Lee told the conference that the docklands area is "crying out for tall buildings".

Tower Holdings' second plan for Cork is the 34-storey Custom House skyscraper, which has been designed by Gensler, the American architecture firm which designed the Shanghai tower, currently the world's second tallest building.

Mr Lee said: "We believe it is a really good scheme but we wondered what we could do with the site.

This Article was orginally seen at https://www.irishexaminer.com/