Monika Slowikowska is incredulous when people tell her foreigners will still want to come to the U.K. after the country leaves the European Union.

As a Pole who owns a London construction company, Slowikowska is less sanguine. She fears for an industry facing a Brexit immigration clampdown, including high salary requirements for visas and restrictions on low-skilled labour.

“We believe that we’re still a paradise destination,” said Slowikowska, who has lived in the U.K. for 20 years and employs nearly 200 people. But that’s “just unrealistic” when workers can choose other countries such as Germany, Norway and Ireland, she said.

High living costs and a falling pound are further deterrents for EU citizens considering settling in Britain. With Prime Minister Boris Johnson vowing to get out of the EU on Oct. 31, “do or die,” the pound is at its lowest levels since shortly after the 2016 referendum -- eroding the value of money earned in the U.K. when remitted overseas.

The construction industry, which accounts for 6% of the economy and employs a similar number of people as manufacturing, has a lot to do to prepare for Brexit, when free movement of people between Britain and the remaining 27 EU countries will end. With the government setting ambitious home-building targets, the sector faces an acute labour shortage after struggling to recruit workers for a decade. 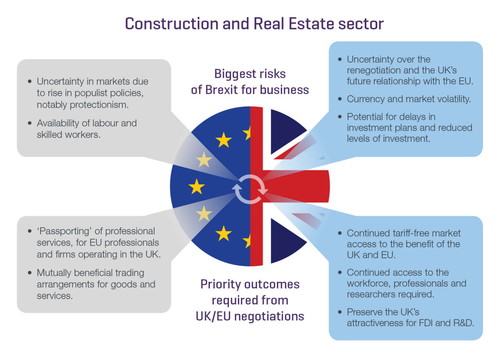 Under plans set out in December, post-Brexit rules will require EU workers to be divided according to their qualifications. “High-skilled workers” would be those with a secondary-school degree or higher. Only those who earn at least 30,000 pounds would be allowed to work and stay in the country. For foreign workers without these qualifications, there would be a one-year limit to living and working in the U.K., before they would have to leave again for another 12 months. Almost half of builders are non-U.K. nationals.

A failure to attract young people means the industry is reaching retirement age unusually quickly: just 10% are under 25.

That means a labour shortage in the near future: The Construction Industry Training Board estimates that the sector will need to recruit and train 31,600 workers every year for the next three years just to keep up with demand. The number of apprentices going into construction fall short of this figure by almost a third. The construction industry has been grappling with how to deal with a shrinking workforce. Ian Calvert Sutcliffe, chief executive officer at Countryside Properties Plc, says the company is mindful of the “shortage of skilled labour on site” when thinking about expanding.

This Article was Orgianlly Seen at.