The Democrat-led US House of Representatives has approved $4.5bn (£3.5bn) in humanitarian aid for the southern border, which has seen a surge migrants entering the US from Mexico.

Overall, $6.1bn in funding had been secured by May 2019 to build 336 miles of new and replacement border wall, according to US Customs and Border Protection.

Department of Defense funding is also paying for an additional 131 miles.

The first construction on any extension to existing structures - what could be termed new barrier - has started in the Rio Grande Valley, Texas, where 13 miles of "new border wall system and levee wall system" is being built.

Although a further 95 miles is planned for that location, construction at five major landmarks along its length has been prohibited and some landowners have gone to court in an attempt to stop building on their property.

Despite Mr Trump's continued determination to see a wall along the border, a survey in January by the Pew Research Center suggests the majority of Americans - 58% - oppose substantially expanding it, while 40% support it.

Trump wanted concrete, but is now talking about steel 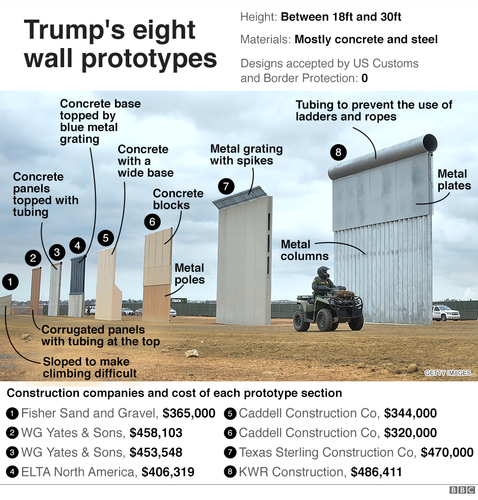 Mr Trump has changed his view of what constitutes a wall.

His promise to build a "big, beautiful wall" between the US and Mexico was a rallying cry throughout his 2016 election campaign. And early on, when he described it, he talked about concrete.

But once elected, he began talking about a barrier made of steel, so that border agents could see through it.

And in October 2017, when the Trump administration revealed eight 30ft-tall wall prototypes - they were a combination of concrete and metal.

This Article was originally seen at