Studio founder James Law envisions these tubular structures being piled up on top of one another, creating affordable starter homes for young people in vacant city-centre locations across Hong Kong.

He told Dezeen he thinks residents could live happily in the tubes for one to two years. He believes they would appeal to "young people who can't afford private housing"

The interior walls are whitewashed, lessening the industrial aesthetic, while a flat wooden floor has been installed to make it easier for the occupant to move around. A bench seat can be folded down to also function as a bed, with the cushions doubling as a mattress. There is also room for a mini fridge, a microwave cooker, a rail to hang clothes from and a stand to place a suitcase on. 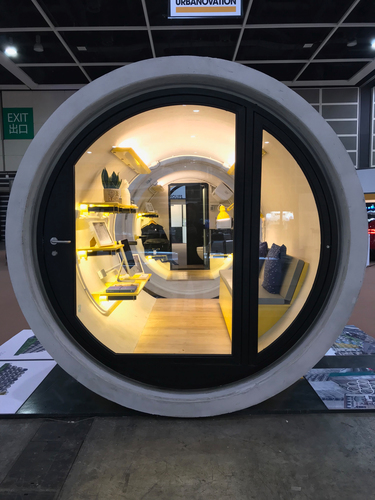 The micro apartments cost approximately €12,000 each to manufacture, and could be rented out for less than €320 a month. The average rent for a one-bedroom apartment in the centre of Hong Kong is currently over €1,900

This Article was orginally seen at --> https://www.dezeen.com/2018/01/16/opod-james-law-cybertecture-hong-kong-micro-apartments-concrete-pipes-low-cost-housing-crisis/